Celebrating the life of artist and politician Louis Abolafia

Northport, NY - Akkseum and Gallery 37 present the stunning works of counterculture icon Louis Abolafia at their November 1st Masquerade themed event. The event focuses not only on Abolafia's prolific artistic career- the Gallery has access to over 200 pieces from the family's personal collection- but also his political career.

Abolafia first gained notoriety early in his career for guerrilla-like protests of the art industry. When he was a student he snuck one of his own pieces into the Metropolitan Museum of Art and hung it on the wall with other great masters. Abolafia continued to push the envelope in 1968 when he began his underground campaign for president, despite not being of legal age to run. His slogan- "What have I got to hide?" an apt phrase for the man running under the Nudist Party platform and on The Love Ticket. 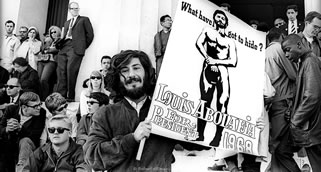 He also designed his own posters and propaganda, which featured a black and white image of himself standing in the nude with a strategically placed bowler hat and his campaign slogan. Abolafia also began staging Love-ins in Greenwich Village, to promote his campaign. These all day and night events were designed to bring the arts and people together. He continued to run for president until his sudden death in 1995.

Louis Abolafia was first and foremost an artist. While his political campaigns, celebrity friendships, and social activism gained him attention and fame, it was his art that Abolafia focused on. He painted and sketched hundreds of works. Akkseum and Gallery 37 are privileged to bring these seminal works to the public and hope that others will join in to commemorate this American pioneer's incredible life and work.

A portion of all sales of Louis Abolafia's work and all other Gallery 37 pieces from November to January will be donated to Kristy's Smile Foundation to help provide direct relief and homeless services to low-income individuals, children and their families on Long Island. The majority of funds are allocated to the Family Service League's Community Advocacy Information and Referral Program (CAIR) & the Huntington Interfaith Homeless Initiative (HIHI). The foundation honors the life of Huntington native Kristy Irvine-Ryan, a victim of the 9/11 attack on NYC. Please visit Kristy's Smile on Facebook for more information.